Radioactive waste, inherited from past nuclear activities, are still stored at the respective production sites (nuclear power plant or experimental research facilities). To these are added the waste generated by research activities, medical and industrial, currently stored in temporary deposits at authorized national operators.

Part of this waste has been conditioned and, for the remaining part, conditioning operations are in progress or planned.

In this context, ISPRA (and, since it is operational, ISIN) has repeatedly formulated and reiterated the fundamental objectives to be pursued in the management of radioactive waste. In particular in the long term, ISIN tries to inform competent administrations to undertake adequate actions to rapidly reach the realization of the national deposit that will allow to hold the radioactive waste still held in the various plants as well as the waste generated by the reprocessing of the irradiated fuel abroad destined to return in Italy.

The ISPRA Center for Nuclear Safety and Radiation Protection, now merged into ISIN, has developed, since 2000, the “National Inventory of Radioactive Waste", annually updated.

The Inventory, which also includes spent fuel and disused sources, is processed with data relating to volumes, masses, physical, chemical and radiological characteristics, container characteristics and storage conditions of the waste. The document is prepared on the basis of the data that annually the various operators, who have the primary responsibility for the safe holding and management of the waste, transmit to the Inspectorate. 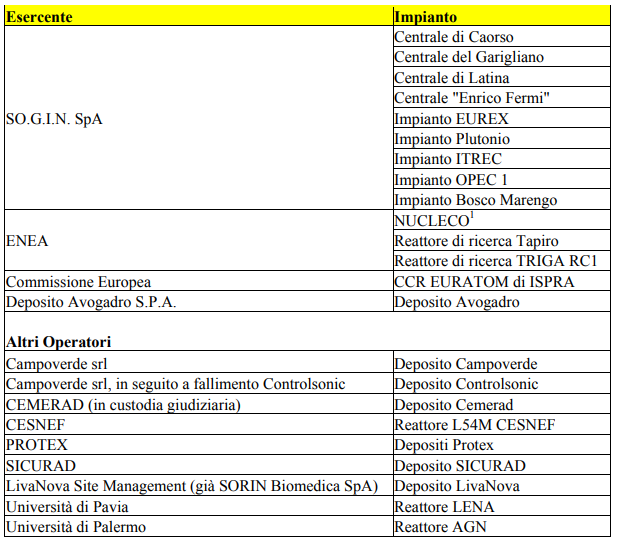 Based on the most recent data (December 2017) provided by the operators, the total radioactive waste present in nuclear installations, including those generated by medical and industrial activities, is approximately 30 thousand m3. The waste generated by decommissioning is mainly characterized by low or very low activity; those that will return to Italy from England and France in the next few years, deriving from the reprocessing operations of irradiated fuel, amount to approximately 40 m3 of high activity and about 35 m3 of medium activity respectively.

It must be considered that waste from medical and industrial applications will continue to be produced, for which an annual production of approximately 300 m3 is estimated.

In terms of safety of radioactive waste management, ISIN is in charge of preparing the national reports required by the Joint Convention on the Safety of Spent Fuel Management and on the Safety of Radioactive Waste Management and on the safety of irradiated fuel management, ratified by Italy with Law 16 December 2005, no. 282, participating as representative of Italy in the periodic review conferences provided for by the Convention itself.

ISIN prepares the national periodic report on the implementation of Directive 2011/70/EURATOM for the establishment of a Community framework for the responsible and safe management of spent nuclear fuel and radioactive waste.