IRRS mission on the nuclear safety regulatory system in Switzerland 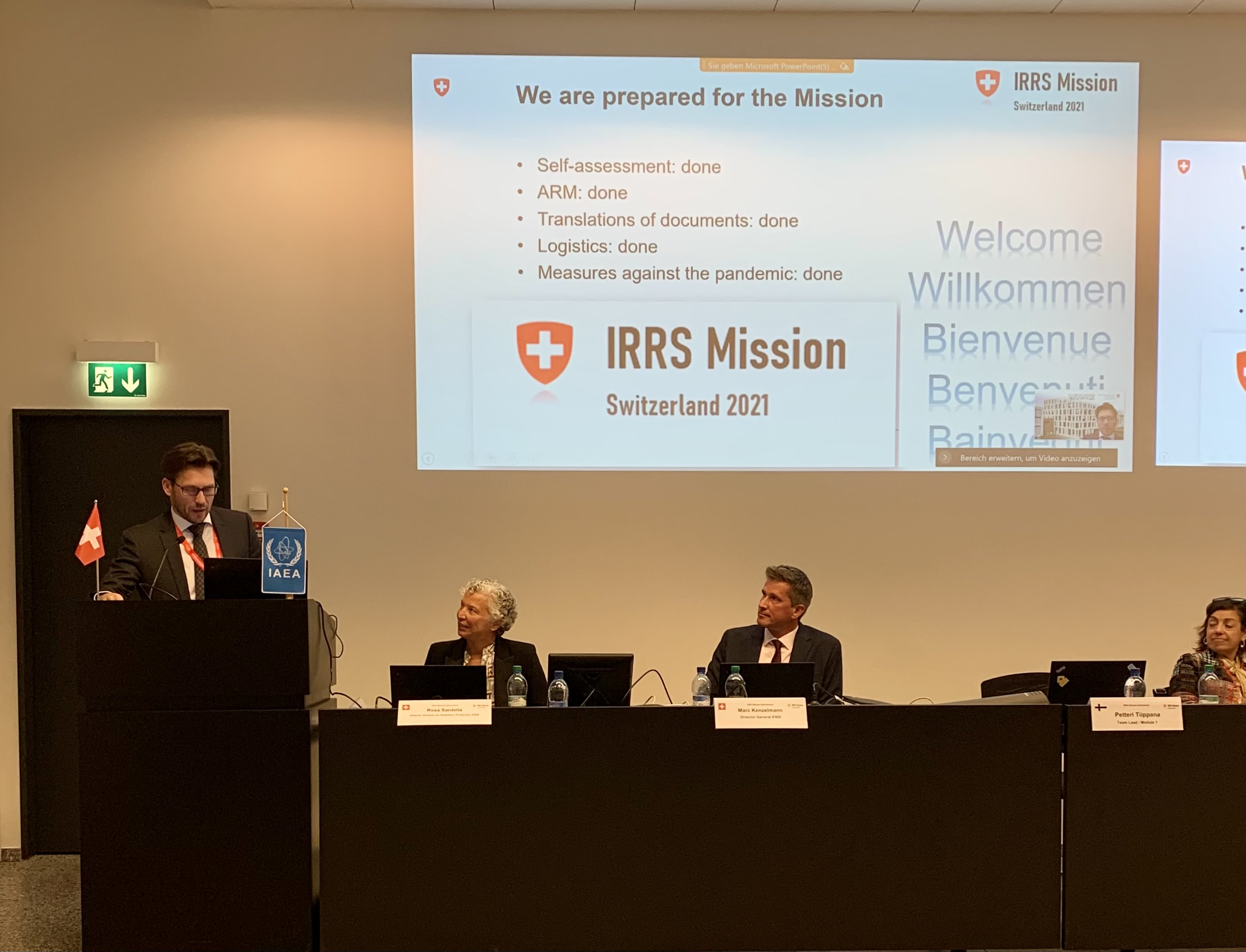 IRRS mission on the nuclear safety regulatory system in Switzerland

The "Integrated Regulatory Review Service" (IRRS) mission of the International Atomic Energy Agency (IAEA) is underway in Switzerland and will continue until October 29, aimed at revising the Swiss national regulatory and control system for nuclear safety and radiation protection of installations and activities for the use of ionizing radiation sources. The mission was organized by the Federal Nuclear Safety Inspectorate (IFSN), which performs the main functions of regulatory authority responsible for the matter in Switzerland.
The peer review process makes it possible to compare the national regulatory and control system with the IAEA safety standards.
The IRRS mission in Switzerland, led by the Director of the Finnish Nuclear Safety Authority (STUK), is made up of a group of 21 international experts from different countries (Finland, France, Japan, Ukraine, Spain, Sweden, Pakistan, China, USA, Canada, Denmark, Germany) and the IAEA itself. Italy also participates among the experts with a representative of the ISIN.
The experts, in order to identify areas for improvement, will examine the various aspects of regulation and control relating, in particular, to the responsibilities and functions of the government in the matter, to the fulfillment of the obligations established by the international conventions in the nuclear field, to the organizational aspects, the procedures for carrying out authorization processes, independent reviews and evaluations, and the management of emergencies.
As Switzerland is one of the neighboring nuclear countries, the mission is of particular importance for Italy, also in order to ensure that nuclear power is managed in accordance with the most recent international safety standards.
Regarding the nuclear situation in Switzerland, it should be noted that, after the Fukushima accident in 2011, the Swiss government decided to abandon the project to build three new nuclear power plants; at the same time, it decided for a gradual exit from nuclear power. Based on the opinion of the Inspectorate, the operation of the 4 nuclear power plants currently in operation can be extended and can reach up to 60 years of operation.
Regarding the disposal of radioactive waste, the Swiss strategy provides that all waste categories, low, medium and high activity, are confined in geological formation.
The site selection process has been underway since 2008 and, in accordance with the procedures, phase 2 of public consultation of the Sector Plan was completed in 2018, the plan for the construction of two disposal plants in geological formation, one for low and medium activity and one for high activity. In 2019, NAGRA, the Waste Management Agency, began investigations at sites in Jura-east, Nord des Lägern and Zurich northeast, all in northern Switzerland. The investigations (Phase 3 of the Sectoral Plan) are being completed and it is expected that, in 2022, NAGRA will communicate for which site it intends to request authorization to build the disposal plant. Subsequently, further investigations will be carried out and, in 2030, there will be a referendum. The operation of the deposit for low and medium activity waste is scheduled for 2050 while for the deposit for high activity waste and irradiated fuel it is scheduled for 2060.
In the field of decommissioning, it should be noted that the decommissioning operations of the Mühleberg nuclear power plant, which was shut down in December 2019, have already begun. The authorization for decommissioning, in fact, had already been issued by the Federal Department of the Environment, Transport , energy and communications (DETEC), based on the opinion of the Inspectorate, in June 2018, therefore before the shutdown of the reactor.
ISIN and IFSN have established an Italian-Swiss Commission for cooperation on nuclear safety, radiation protection, emergency preparedness and protection and radioactive waste management. The Commission meets periodically and the next meeting is scheduled in Switzerland on 20 and 21 June 2022.
Italy, which received an IRRS mission in 2016 (https://www.iaea.org/sites/default/files/documents/review-missions/irrs_italy_final_report_2017.01.30.pdf), based on the requirements of the 2014 Directive / 87 / Euratom, implemented in Legislative Decree 101/2020, will have to host a new mission by 2026.